I always liked the HK MP5 Surefire handguards with its built-in light and wanted one for the FN F2000/FS2000, but unfortunately (as of this writing in 2019) no company has mass produced any, so I decided to look into building my own.

I came across a few mentions of other FS2000 owners putting lights into their forend/handguards and it appeared relatively simple, but I didn't come across any step-bystep tutorials online so I decided to make one as I went along.

As a few others have noted, upon disembling the OEM factory FN FS2000 handguard/forend, there are marks along the surfaces of the bulkheads (see photos below) of the handguard which mark circular patterns possibly indicating an opening to mill out for a light.

I suspect FN had future plans for this but never implmented them.

The following is a list of parts you will need.

First, I suggest you get an extra FN FS2000 handguard just in case you mess up or want to go back to a plain stock one, they cost about $30. 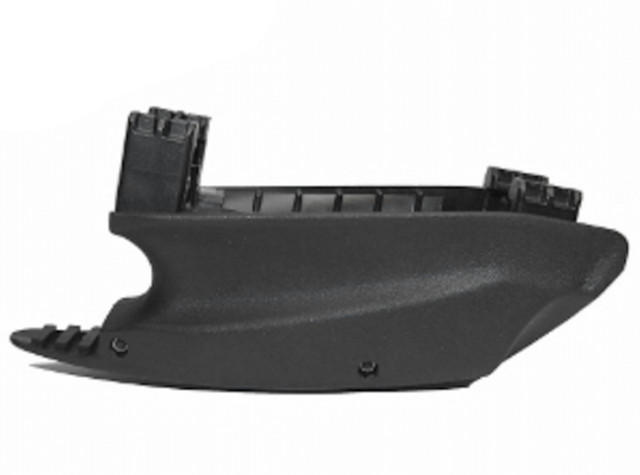 I tried many lights and found that the Streamlight Protac fits and works quite well, abet a few issues with the pressure switch fitting (more on that later). It has a decent 350 lumens illumination, waterproof up to 1 meter underwater, and will survive recoil of a 5.56mm. Those are the main reasons as to why I choose it for this tutorial. 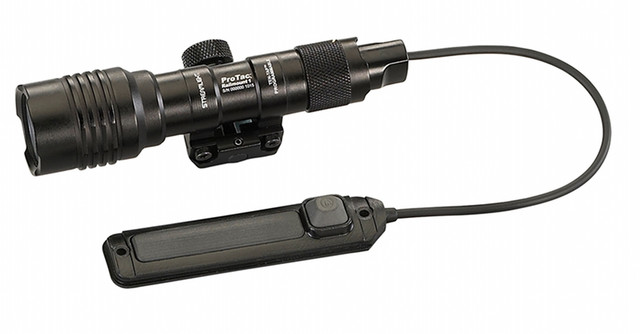 You can get the Streamlight Protac here for about $120.

Note that you can try other lights, but the fitting may be different and pressure switch location may have to be modified.


You will also need some additional bolts and nuts: 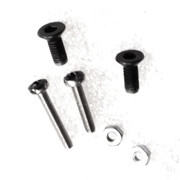 The two larger diameter machine screws came with the light, they are used to secure the light onto the handguard from atop. Your light may or may not have them.

The two thinner 1/8th inch diameter machine screws are to secure the pressure switch of the Streamlight Protac on to the handguard. Note that one is about 10mm and the other is about 15mm. The nuts are for these two machine screws.

You can get these machine screws at most hardware stores (Ace or Truevalue).

Some tools you will need include; safety goggles, dremil, hex key set, electrical tape, and some precision hand files for finishing work. Course and medium sand paper can also help.

First, make sure the rifle is unloaded! Remove the magazine, open the hood cover, pull the bolt back and inspect the chamber.

Take part the FS2000; Press in the locking latch from right to left (the latch will not pop out completely, only push it in from the right and pull it from the left as far as it will go) then pull the upper receiver forward (you may need a bit of force to do this) separating it from the lower receiver.

Once the upper receiver is off the lower reciever, the forend/handguard is free to drop off from the receiver by pulling it down.

Once you have the handguard/forend removed from the lower receiver, unscrew the two screws holding the two halves together.

Inspecting the handguard/forend you should see two screws holding the two halves together, use a allen key to unscrew both to separate the two halves.

Be sure to save the bolts and nuts, do not discard!!


MILLING OUT THE HANDGUARD BULKHEADS

Next, mill out the areas as shown with a dremil and cutting wheel (you may need a 1 inch cutting wheel to cut the bulk heads to sufficient depth.

If you are not experienced with the dremil, be careful when using the cutting wheel as it will cut through the plastic like butter! Cut/mill off small amounts at a time and test fit with your light as you go along.

Each light may have a different shape so pay attention to that.

You will have to cut both the red and blue walls shown below.

Note that there is one wall in between that is already cut out by the factory. 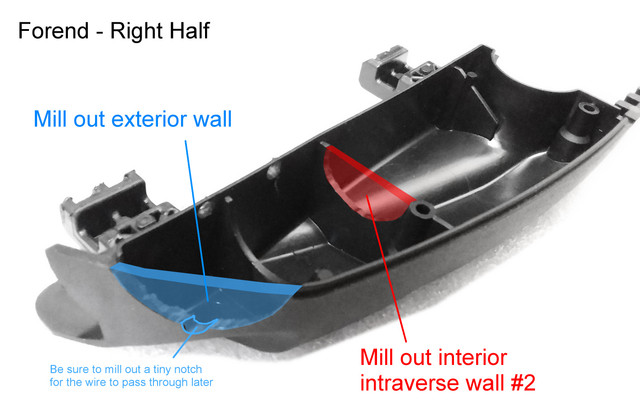 Now move on to milling the left half. 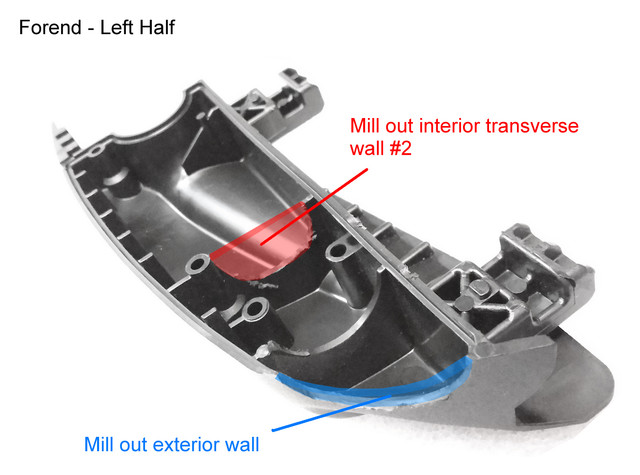 At this point you may want to test fit the light by trying put the light in between the two halves (do not screw it in just yet).

Dremil or sand/file some more as needed until you get a decent fit and finish that you are happy with.

Also check to make sure the light is "zeroed" to where you want it. If it's slightly off, you can use electrical tape and padd it against the cut bulkheads to change its direction slightly.

Some pressure switches are intended to be glued on so you could use epoxy/quicksteel to do that.

I suggest start by placing the pressure switch on the side of the handguard wall and find the ideal spot you want it.

However, before you start drilling any holes, make sure that the hole locations (outside and inside) do not place the nuts and bolts in a location that it could obstruct fitting on to the receiver (see photos below).

This is my location for the Streamlight Protac pressure switch. 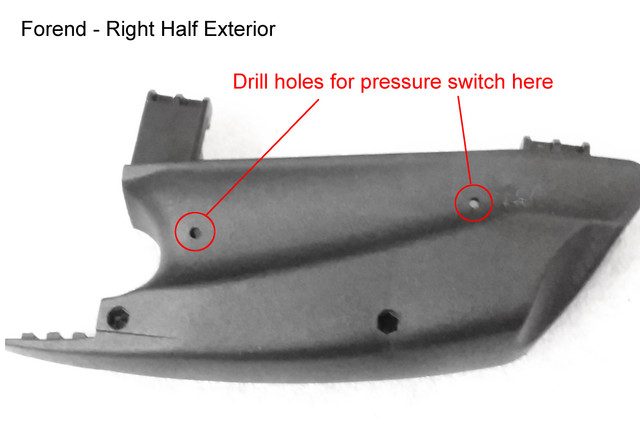 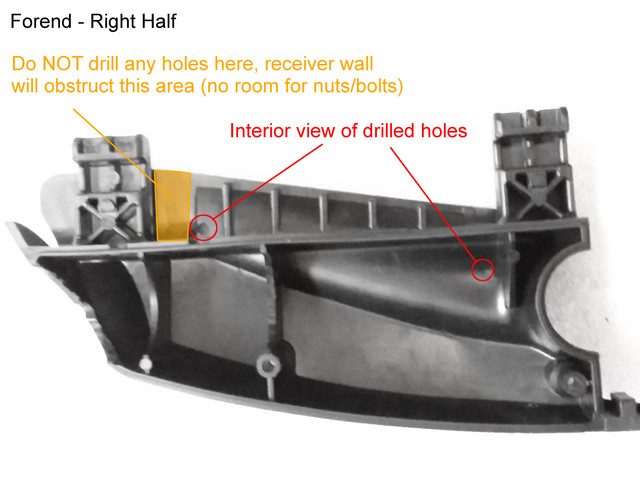 I suggest drilling the first hole and then screwing the pressure switch on to the handguard/forend before moving on to drilling the next hole.

You can always cut your machine screw lengths as needed, I suggest buying longer ones and cutting them down with the dremil cutting wheel as needed. 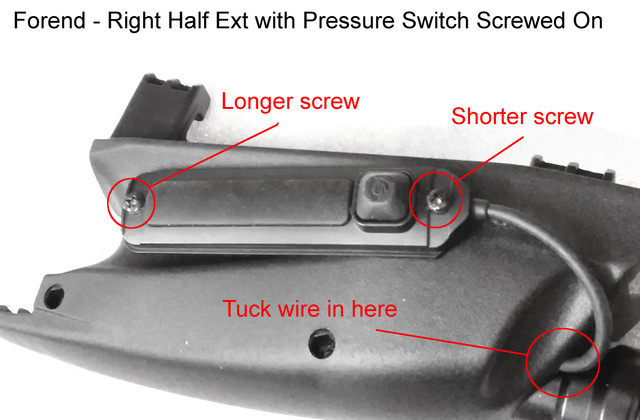 One issue I found is that there is a bit of a gap between the pressure switch and the handguard wall as it has a trough/groove for your the operators fingers.

I found that I could mold a piece of JB Weld Quicksteel to fit into that area. I suggest that you do NOT let the quicksteel dry on the handguard or switch but rather let it set on its own on a piece of paper after forming it into the right shape, then placing it between the pressure switch and handguard wall.

Next, temporarly put the two halves of the handguard together with the light in there to check for fitting.

Then open and mark the location on top to drill holes to mount the light into the top deck of the handguard.

For the Streamlight Protac, I suggest favoring the right side when drilling these holes (see photos below). 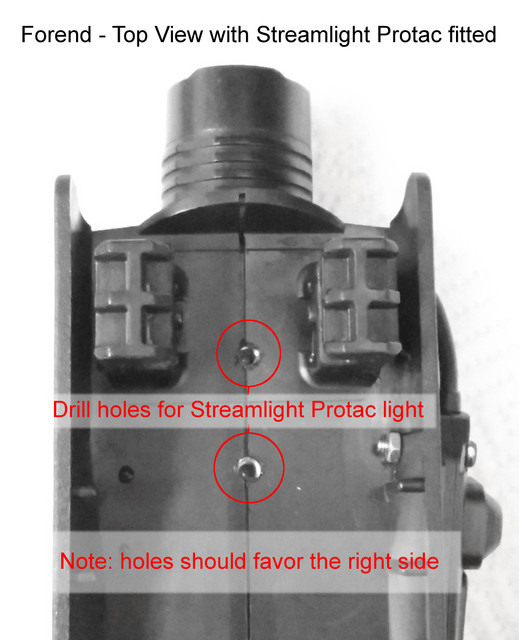 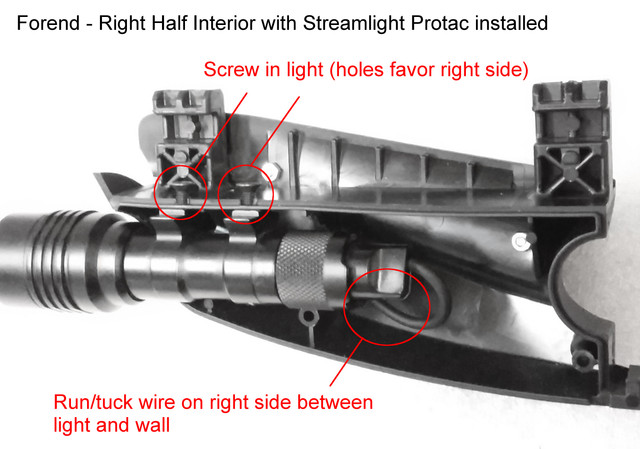 Drilling these holes precisely can be a bit challenging. I used a drill press and a smaller bit to start off, then worked my way to bigger bits to get the right size. I temporarly screwed the two halves together after marking the hole locations without the light in there and drilled, slightly favoring the right side as shown above.

Note that your light may have slightly different hole locations so be sure to check and measure three times, cut once.

There doe snot seem to be any fixed/specific position for the light, so you may want to test fit for a while before committing to drilling any holes.

Note that JB Weld Quicksteel can be used to fix mistakes, though it's better to drill the holes correctly.

Place the light back into the handgoard/forend, using any electrical tape to padd areas as needed.

Note that the light's wire/cable should run along the right/top inside of the handguard/forend.

Then get the original screws and nuts for the handguard/forend and assemble the two halves back together with the light inside it. 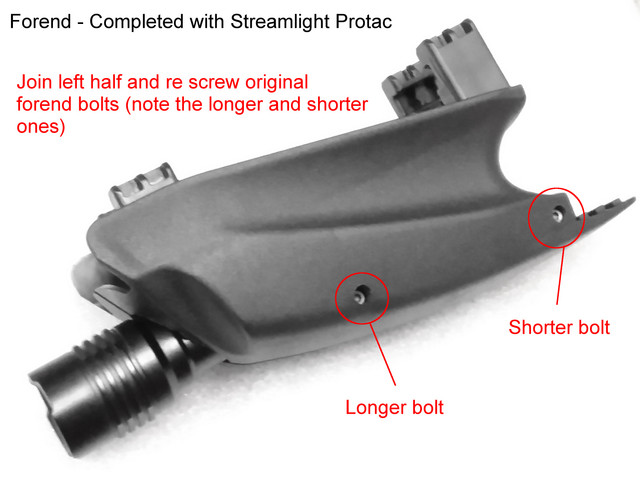 
Test the ligth and look down the sights to make sure the light is "zeroed".

You may need to re-open and padd electrical tape to adjust the direction of the light as needed.


I hope you find this useful, leave my any tips, comments, corrections, and complaints below.
1 - 1 of 1 Posts

This is an older thread, you may not receive a response, and could be reviving an old thread. Please consider creating a new thread.