Joined 29 d ago
·
1 Posts
Hi gang,
I'm a California gun owner (I hear all of you telling me to move from here. haha) and I really want to get my kid one of these 502 pistols. She will be 10 and I've been taking her shooting since she was 8, so we are ready to move up from the single shot pistol.
If anyone knows of someone in Southern Cali looking to sell theirs, please DM me (I'm new here, is that a thing?). Just in case none of you are familiar with California's wonderful gun laws, we have an "approved handgun" list here in Cali and I don't know how many years its been since a new one got on.
The laws are so bad here I found a guy in N.C. that was willing to sell me his but in Cali a private party transfer has to be done in person and both have to be Cali residents. So freaking annoying living here as as a gun owner. So if any of you are ultra rich, and feel like adopting me and my family, I'll take that over the FN 502 info! Haha!
Thanks gang!
jerdog3
R

Joined Dec 31, 2016
·
67 Posts
Welcome to the forum and good luck on your future move from CA and being a proud owner of multiple FN weapons.
A

Joined 17 d ago
·
8 Posts
I've been searching for a 502 for a bit now and finally bit the bullet and did a back order. Sure enough, next day I found one locally and just picked it up. Effing Murphy. First FN.

I did have a Ruger 57 for a bit as I've always been fascinated with the 5.7x28mm round but the fact I didn't want to take on reloading duties with that cartridge had me put it up for sale along with all the ammo I had. I'll revisit if things ever come back down (ha!). I've always wanted a PS90 as well.

Anyway...I was looking for black but the local gun was FDE and I went for it. Paid MSRP at Academy Sports and they had the Holosun 507C in stock as well which is the RDO I use on my other hand gun. Really happy the gun comes with three mounts. The included screws, however, are too long for the Holosun. It's somewhat secure, but they're not sunk in and the bevel isn't sitting against the RDO's bevel. So I'll be trimming those a bit to get it installed correctly. 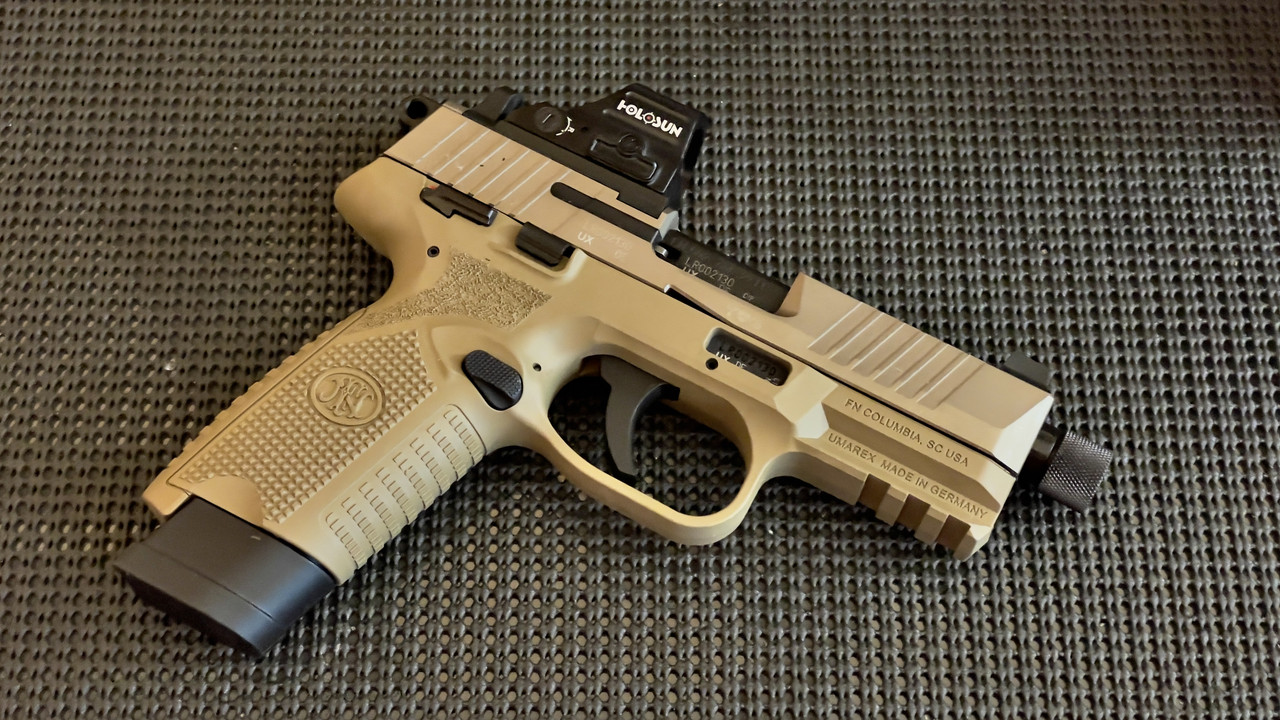 I am not a prolific handgun owner. I have exactly one other hand gun so my initial impressions are strongly influenced by it. My first thought was it's incredibly light and feels kind of cheap. I racked the slide without a magazine and it stuck all the way back. Seems to be hanging up on the hammer a bit so I stripped it down, lubed it appropriately and then actuated the slide repeatedly. Got a bit better and finally seemed to loosen up and function correctly after a light coat of oil on the barrel. I'm sure break-in will improve everything.

Love the grip and texturing, magazine button placement is perfect. The trigger itself, the material, almost feels like plastic but the trigger break seems decent. Did I mention it's stupid light? The magazines feel flimsy but noticed the center portion is metal. I'll likely order a few more 15 rounders.

They had very little to choose from in 22LR at this particular Academy so I grabbed a brick of 500, Remington "Thunderbolt" which was a whopping $40. I laughed while it was being rung up.

Now with all that said, here's my other handgun, an LTT Elite with RDO cut. It's a big, heavy, solid beast of a gun but it shoots so well it's like cheating. With that gun as a reference, it's no wonder the FN feels so light (and cheap) in comparison. It's also about $1K in price difference between them so there's that. My neighbor has the Walther P22Q so I may do some sort of comparison between the two. I like the Walther's ergos and I've heard they have a great trigger out of the box as well. But alas, no RDO cut. 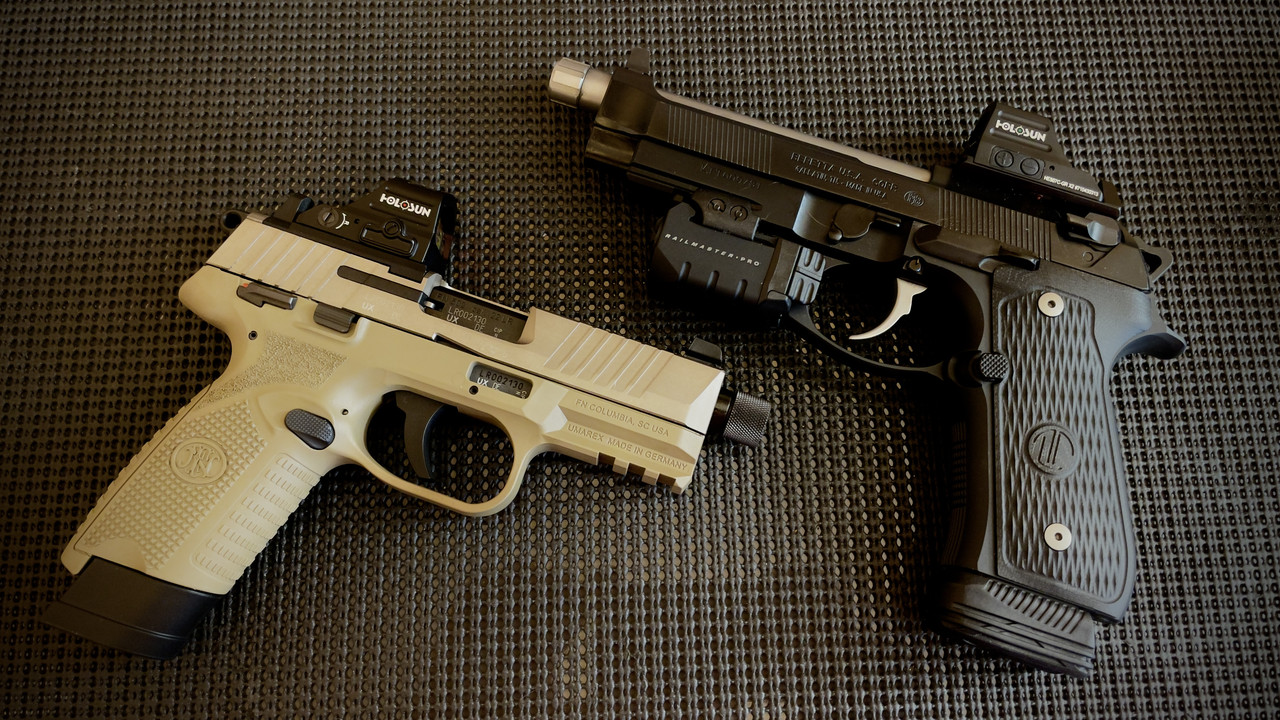 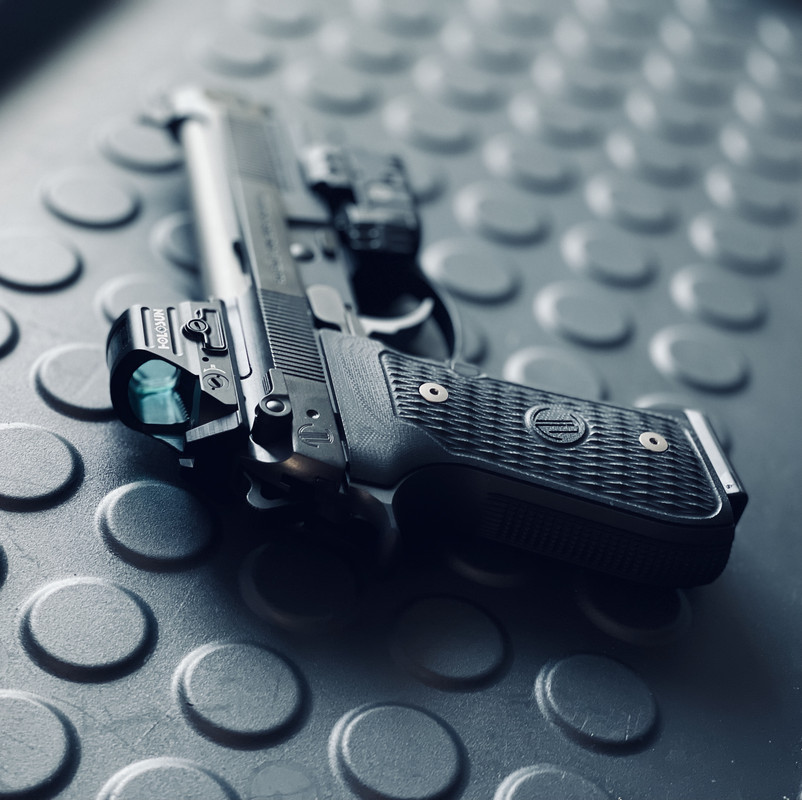 I plan on using this for training and for my wife to shoot. I really bought it for her. Cough. What...? I swear!
A

Joined 17 d ago
·
8 Posts
I had time to hit the range today but before I did, I shortened the RDO mounting screws and got all of that situated/secured. Drove out to the range and brought the LTT along for comparisons. I put about 200 rounds through the FN and it honestly felt gratuitous to shoot more than that. There was a tinge of guilt given the ammo shortage.

I had exactly two failure to fires, both ammo related. Other than that, the gun functioned flawlessly. The Remington 40gr. cycled fine even with the extra weight of the RDO.

The gun did loosen up. After the range session, I cleaned it thoroughly and re-lubed it and it seemed to be not nearly as tight and the slide seemed to articulate more smoothly overall.

Recoil on the grand scheme of things is just not there. I consider myself a rifle guy and I'm not nearly as good with a sidearm. The FN is just stupid easy to shoot and given that it's a full-sized gun, it's easy to get a good grip and just drill an entire mag without much effort.

Transitioning back to the LTT, there's noticeably more kick so I'm not sure, as a training tool, how the FN is going to help my situation other than being able to present and find the same red dot (Holosun on both). It did cause me to re-examine my grip and I feel the light on the LTT is actually hindering my grip vs the FN.

The other big difference between the two is trigger reset. Granted, the LTT, which I purchased from Langdon with their trigger job, pretty much sets the standard. I found myself having to mentally let the FN's trigger return further to fire the next shot. The LTT's trigger resets with about a mm of travel and I'd guess the FN is 4X as long. So it's a definite mental exercise. I found myself not being able to fire the next round a few times as I'd not released the trigger enough to reset.

Love the texturing on the FN. I read a lot of reviews on the 509 and how some complained the grip texturing was too aggressive. I don't see it but maybe the extra kick makes it annoying. Dunno. Not a problem on the 502.

The second flaw is this thing should come with at least three 15 round magazines (where allowed) or even a much longer extended mag to hold 20 rounds or so. I'm sure the aftermarket will come up with a solution but it's so easy to burn through a magazine that more than one 15 rounder should be included. It's easy to reload the mags (unlike the Beretta which is a PITA without a speed loader) and extra magazines seem to be vaporware at the moment.

I did briefly run over to the neighbor's house to compare to the Walther. I'll say the Walther feels a fraction more substantial/precise but not enough to make any sort of a judgement. I'll have to shoot both back to back.

Closing notes, no regret in purchasing the gun. I'm a modaholic so it'll be interesting to see what the aftermarket comes up with. I'd like higher capacity mags and a shorter trigger reset. I also need to order a silencer and will likely go with the OSS Rad 22 as I've had such great success with their suppressors on other platforms. The catch 22 is that it's a 22LR and really, how much money do you want to throw at it? 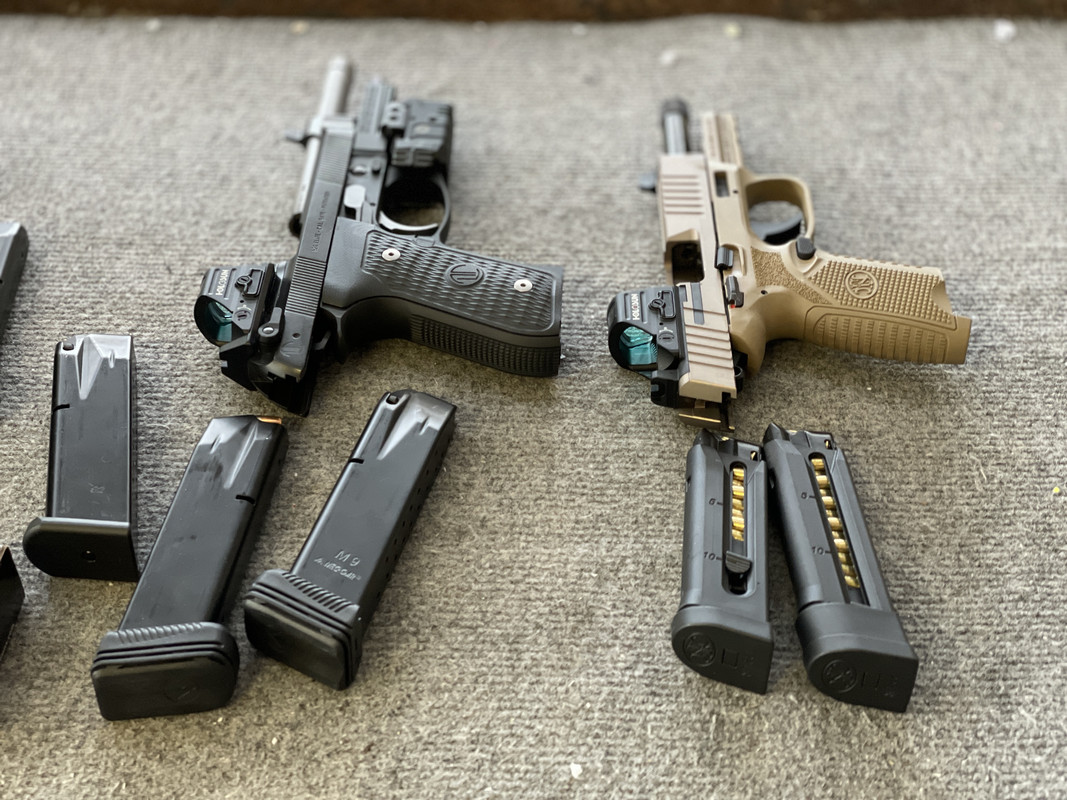 Joined Jan 4, 2019
·
957 Posts
Thanks for sharing your review! Interesting observation on the viewing port exhaust. How's working the safety with your shooting hand?
A

Joined 17 d ago
·
8 Posts
I honestly didn't use the safety. Any time I put the gun down, the mag was empty, LOL. Just too much fun to shoot. I'd say the safety is a bit stiff to use otherwise but again I'm sure it'll loosen up a bit with time. My Beretta is a "G" meaning no safety but a decocker instead. Wasn't sure if I'd like that but I actually do. And with the dual action trigger, it's a safe setup. I definitely have to adjust going between the two triggers.
A

Joined 17 d ago
·
8 Posts
Here's a photo of what I guess would be called a chamber window (?), right in front of the RDO's glass. You get a small jet of gas which deposits onto the glass. I didn't notice it looking through the red dot while shooting so maybe a non-issue. 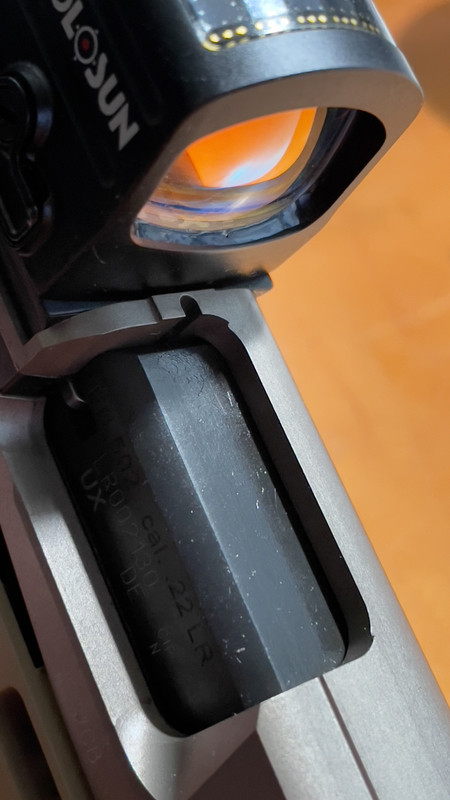 FN47, tried working the safety and it can be done without removing your primary hand from the shooting position. It's easier to disengage than to engage and you end up manipulating the lever with your knuckle and not the tip of your thumb. But it's doable and doesn't take a lot of effort to manipulate it. It's just not very tactile and a little gritty feeling.
A

Joined 17 d ago
·
8 Posts
One question I did have is on 22LR ammo. Having never owned a gun that shoots this particular round, I've noticed quite a velocity spread between rounds. CCI alone has a dozen different loads, some pushing 1600+ fps. Are those safe to shoot out of the 502? Nothing's mentioned in FN's manual other than use SAMMI spec.

Owning a 9mm, there's of course hotter commercial loads available, +P and ++P so wondering if there's a similar rating system for 22LR?
A

Joined 17 d ago
·
8 Posts
Added an O-light. They're long but that'll come in slightly handy when there's a suppressor on the end. Like the way it functions and you can grip it without accidentally turning the light on. I keep the light on low power for indoor use, haven't tried it outdoors at night yet.

The new version is rechargeable and comes with a magnetic charger. No need to take it off the gun or anything. 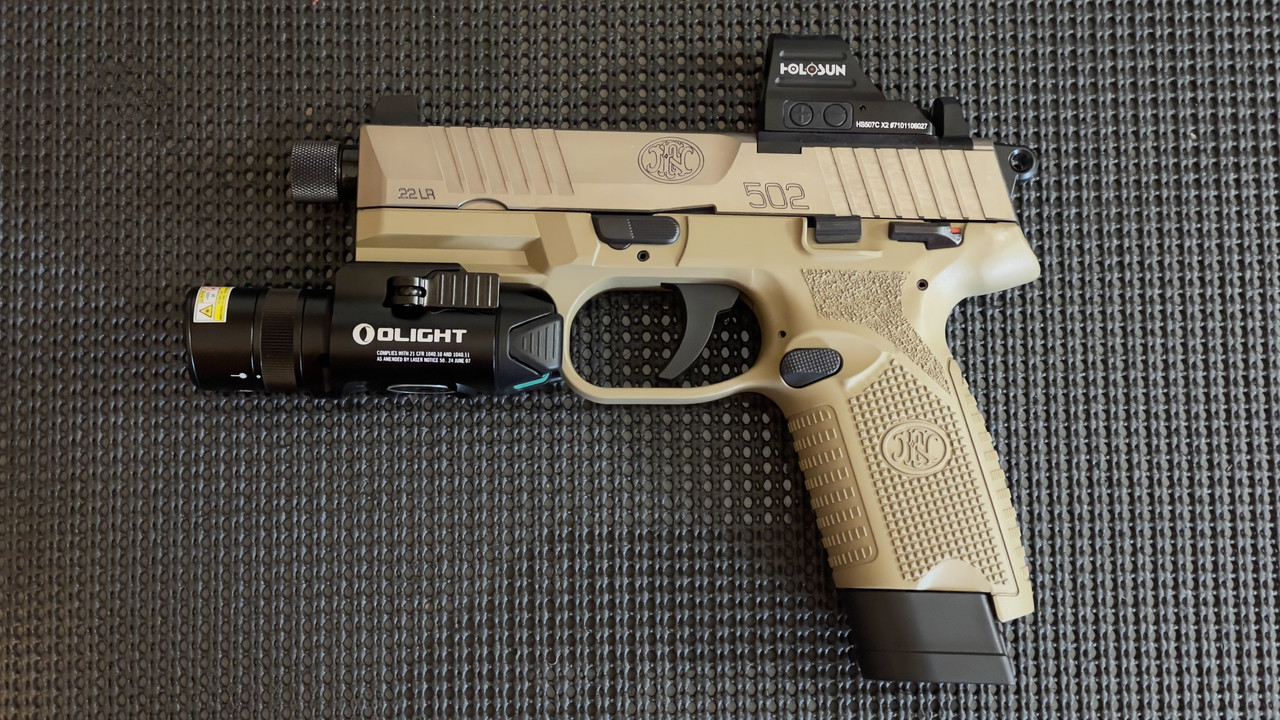